The Kadam Tradition of Atisha*

The Kadam (Wylie: Bka’-gdams-pa) tradition was a Tibetan Mahayana Buddhist school. Dromtönpa, a Tibetan lay master and the foremost disciple of the great Indian Buddhist Master Atisha (982–1054), founded it and passed three lineages to his disciples. The name kadam derives from “all the ka, or Buddha’s teachings, are dam, or instructions, for helping an indvidual to become enlightened” and shows “the style of teaching that Atisha established in Tibet.”¹ The pa refers to a person who follows this style of practice.

The Kadampas were quite famous and respected for their proper and earnest Dharma practice. The most evident teachings of that tradition were the teachings on Bodhichitta (later these special presentations became known as Lojong [Blo-ljong]) and Lamrim (Stages of the Path) by Atisha. Atisha’s treatise the Lamp for the Path to Enlightenment describes the stages of the Buddhist path for three types of individuals with different mental capacities. This text is based on Buddhist teachings such as Maitreya’s Abhisamayalamkara and Mahayanasutralamkara, and Asanga’s Bodhisattvabhumi. According to Ringu Tulku,

in Atisha’s text, the view is Madhyamaka, the practice is Vinaya, and the instructions are mainly on bodhichitta.¹

Tsongkhapa (Btsong-ka-pa) collected all the three Kadam lineages and integrated them, along with Sakya, Kagyu and other teachings, into his presentation of the doctrine. The pervasive influence of Tsongkhapa was such that the Kadampas that followed were known as “New Kadampas” (Sarma Kadampa) or, more commonly, as the Gelug school², while those who preceded him became retroactively known as “Old Kadampas,” or simply as “Kadampas.”

The three Tibetan Buddhist schools (Nyingma, Sakya, Kagyu) also integrated the Lojong (Blo-sbyong) teachings into their lineages. Gampopa (Sgam-po-pa), who studied for six years within the Kadam Tradition and became later the main disciple of Milarepa (Mi-la ras-pa), included the Lojong and Lamrim teachings in his lineage, the Karma Kagyu (Ka-rma Bka’-brgyud) Lineage.

One of the most important sayings of the Kadam masters is said to be:

See harmony in all doctrines. Receive instructions from all teachings.

After the death of Atisha (1054) his main disciple Lama Dromtonpa (Drom-tön Gyal-we Jungne, 1005–1054) organized his transmissions into the legacy known as “The Four Divinities and Three Dharmas” – a tradition whereby an individual practitioner could perceive all doctrines of the sutras and tantras as non-contradictory and could personally apply them all as complementary methods for the accomplishment of enlightenment. Eventually this lineage came to be known as Atisha’s Kadam Tradition, the Marvellous Legacy of Seven Divine Dharmas.

Lama Dromtonpa transmitted the various lineages of Atisha by dividing them between The Three Noble Brothers. To one he gave the scriptural traditions, to the second the oral transmissions, and to the third the pith instructions. The Three Noble Brothers are: Geshe Putowa (Puto Rinchen Sal), Geshe Chenngawa (Chengawa Tsultrim Bar) and Geshe Phuchungwa (Phuchungwa Shönu Gyaltsen).

Dromtonpa founded Reting Monastery (Rwa-sgreng) in 1056 in Reting Tsampo Valley north of Lhasa, which was thereafter the seat of the lineage. The nearby Phenpo Chu and Gyama Valleys were also home to Kadampa monasteries.³

Geshe Putowa (1031–1106) received the transmission and responsibility to hold the teachings of the scriptural traditions, the six Kadampa treatises and hidden verbal transmission of both sutra and tantra from Dromtonpa.

The six Kadam treatises he held are:

It is the tradition to read at the Great Prayer Festival (Monlam) the fifth of these, A Garland of Birth Stories, during the morning session. It was also the tradition of the Kadampas to teach the two texts Jatakamala and Udanavarga together and when they taught Shantideva’s Bodhisattvacharyavatara they taught the Shikshasamucchaya too.

The six Kadam treatises were mainly used to elucidate the nature of the bodhisattva’s vast activities. Those dealing with the ultimate wisdom of emptiness, the principal texts stressed here were Nagarjuna’s six treatises on emptiness philosophy, such as The Root of Wisdom (Skt. Mulamadhyamakakarika) and so forth, together with the commentaries to them by the later Indian masters; and also Atisha’s own commentaries on the middle view and on the nature of the two truths.

These were the principal scriptures studied in the Old Kadam School.

Geshe Chenngawa (Chengawa Tsultrim Bar) received the transmission and responsibility to hold the oral tradition of instructions (oral transmission). These teachings were mainly dealing with the Four Noble Truths. One of his students, Jayulwa, inherited a special practice lineage which was called Chenga Kague and became a part of the Dagpo Kagyu lineage.

Geshe Phuchungwa (Phuchungwa Shönu Gyaltsen) received the transmission and responsibility to hold the teachings of the pith instructions of the Sixteen Circles of the Kadampa. As a support he received also the empowerments, instructions, and secret teachings of the Lamp for the Path to Enlightenment (Sanskrit: Bodhi Pradipa, Tib: byang chhub lam gi rdon mey). The pith instructions lineage has its root in the secret oral teachings of Atisha and are embodied in The Precious Book of the Kadampa Masters: A Jewel Rosary of Profound Instructions on the Bodhisattva Way. This text is seen as the main text of the Kadampas. These instructions were passed down only to one student in each generation in a single transmission until the secrecy was lifted at the time of Narthang Shönu Lodrö. Later these teachings were incorporated into the Karma Kamtsang Kagyu lineage by Pal Tsuglak Trengwa and Gelug lineage by the First Dalai Lama, Gyalwa Gedun Drup. 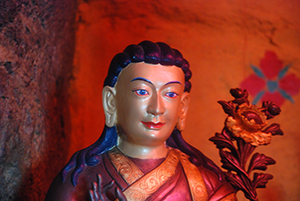 These oral tradition teachings are generally known as “The Instructions for Training the Mind in the Mahayana Tradition” (Theg-chen-blo-sbyong-gi-gdampa-pa). According to the 1st Dalai Lama Atisha has received three lines of Lojong transmission, but there are conflicting accounts of from whom. It is agreed that he received teachings in Sumatra, Indonesia, from a master called Serlingpa (gSer-gling-pa). It is also agreed that he received teachings from a master named Dharmarakshita. However, sometimes Serlingpa is identified as Dharmamati of Suvarnadvipa, and sometimes as Dharmarakshita. In the former case, Dharmarakshita is identified as a scholar at the monastic university of Odantipuri. The final main Lojong teacher is the Indian master Maitriyogi. Atisha secretly transmitted them to his main disciple, Lama Dromtonpa.

During the time of The Three Noble Kadampa Brothers many of these oral teachings were collected together and compiled into the text Stages of the Doctrine (Lamrim; tib.: sTan-rim). Yet at the time the lineages from Atisha’s Indonesian master Dharmakirti (the Lojong – Teachings on how to train in Bodhichitta) were still kept secret.

In this manner, the Lojong Oral Transmission Teachings gradually emerged and became known to the public. Before being revealed, the secret lineage was as follows: Dharmarakshita  Atisha  Dromtonpa  Potowa  Sharawa (1070–1141)  Chekhawa (1101–1175). From Khamlungpa, Langri Tangpa and Chekhawa onwards they became public and later they were integrated into all four Tibetan Buddhist Schools. (These Kadampa-Lojong texts were brought together into the anthology A Hundred Texts on Training the Mind [bLo-byong-brgya-rtsa]). 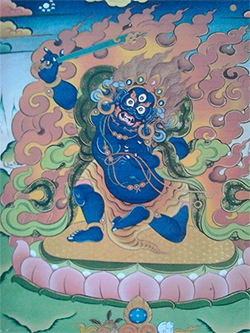 Je Atisha had three chief students, beside the famous Dromtonpa (Dromtön Gyalwe Jungne) who established the Radreng monastery there were Khu (Khutön Tsöndru Yungdrang) and Ngok (Ngok Legpe Sherap). Ngok established the dharma center of Sangphu Neuthok and this institute was later developed further by his nephew, the translator, Ngok Loden Sherap and it became the source of all the Tibetan centers for advanced study (Shedra). Ngatso Lotsawa Tsultrim, a translator who brought Atisha to Tibet, and served him for 19 years was another important student of Atisha. Ngatso Lotsawa Tsultrim received teachings from Atisha, Jnana Akara and others, and his main lineage is called the Ngatso Kagyu.

In general it can be stated the teachings of the Kadampas are upheld by the four schools of Tibetan Buddhism.

In 1991, Kelsang Gyatso (Bskal-bzang Rgya-mtsho), a Buddhist monk trained at Sera Monastery, a Gelug university, founded a new Western organisation which he named the “New Kadampa Tradition.” The NKT claims to hold the ancient Kadampa tradition and Gyatso named his teachings on Buddhism “Kadampa Buddhism”, but many Tibetan Buddhists dispute this contention. According to BBC “Critics have described The New Kadampa Tradition as a breakaway sect or cult and argue it is not part of the ancient Kadampa Tradition but a split from the Gelug school of Tibetan Buddhism.”⁴

In 2015 the NKT started to claim that the Four Kadampa Deities include Dorje Shugden – replacing the deity Achala (tib. Miyowa) with Dorje Shugden. Geshe Tashi Tsering rejected this claim and called it a “pure distortion”.

* This article was initially written for Wikipedia by different editors but mainly by Tenzin Peljor who added the most parts and sources to it.

Images: Statue of Atisha from Sangphu Ne’uthog monastery, founded by the Kadam master Ngog Legpe Sherab in 1073. It is located south of Lhasa, in the region of Tölung Dechen. Dromtönpa statue from Drag Yerpa. © Elke Hessel