Shugden followers are not giving up protests against the Dalai Lama

In late February 2016, a group of Shugden followers, the International Shugden Community (ISC), announced that it would dissolve on March 10th.

Shugden followers constitute a sub-group of Tibetan Buddhism that are notable in their vociferous opposition to the pre-eminence of the Dalai Lama within the religion. The group has been strengthening in recent years, while also making itself more publicly visible, particularly through protests conducted by ISC outside of global public events at which the Dalai Lama is participating.

It is important to recognize that the Shugden world is not monolithic – it is constituted of several small groups, who may or may not work together. The most active of these in the West is a group called the New Kadampa Tradition (NKT), whose central hub is in England. The International Shugden Community (ISC) is a creation of the New Kadampa Tradition (NKT) – the leadership of both are essentially identical.

Further, ISC has made up around 80 percent of the demonstrations against the Dalai Lama as he has travelled in Europe and North America. The statement that the ISC would be disbanding referred to another announcement, dated from December 2015, that the group would halt its demonstrations against the Dalai Lama. However, oddly, this second announcement first became public together with the statement of disbanding.

News about these announcements has spread internationally and the announced disbanding has been connected with a recent Reuters article that purported to show links between the Shugden cult and the Chinese government. This assumed causation, however, is unlikely. For one, what the Reuters report exposed may not have been know to a wider public, but those involved in Tibetan and Tibetan Buddhist circles were well-acquainted with it. Further, while the article interviewed a monk who claimed to have seen Chinese agents giving money to key Shugden figures, this allegation was not actually substantiated. The article also quoted an anonymous Indian government official as stating that money from China was thought to reach Shugden groups via Nepal, but such hearsay can hardly be any solid proof. The monk himself did not provide any further details about the interaction between China and Shugden groups – information that would have brought credibility to his testimony.

But, most importantly in the present context, the monk was not affiliated with the NKT but with a fully different Shugden group in Asia, and hence no connection can be drawn between the Reuters article and the disbanding of ISC, nor between the Chinese and the ISC for that matter, except for their common wish to damage the image of the Dalai Lama. However, this alone is hardly a valid proof of their entanglement in terms of concerted action.

Theoretically, and slightly more credibly, the ISC’s recent announcements could be in part a result of picketing of the NKT centres by Tibetans in the UK. In recent months there has been quite an intensive movement of the Tibetan exile community in Britain – this has been well organized, and they have managed to have their movement well publicized. Still, it is difficult to know the extent of this movement’s impact on what was probably a decision on the ISC’s part that was long in the making. 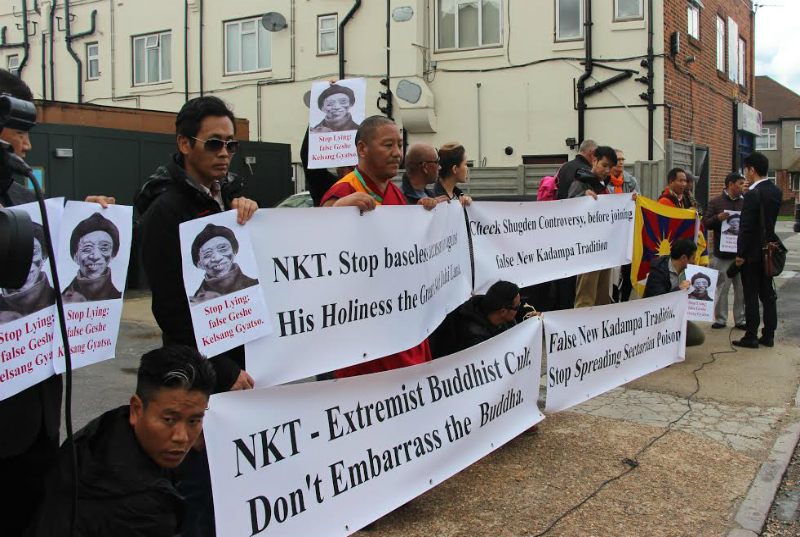 It is known that within the NKT/ISC, there have been questions about the efficacy of the protests against the Dalai Lama in the form adopted so far. These protests have certainly managed to make the Shugden issue more broadly known, but they have not managed to get more sympathy for the Shugden cause. This could well be the key reason now for a change in their strategy.

Finally, while the statement says ISC would disband, it did not appeal for a cessation of protests against the Dalai Lama, nor did it urge people not to demonstrate.

There are also reasons to believe that this could be part of a bureaucratic streamlining. The NKT has purported to be a purely religious institution, yet the significant overlap with the ISC has increasingly become a problem that could potentially affect NKT’s charity status. So the strategy now seems to be changing: instead of sending NKT monks to protest the Dalai Lama, it is likely that private initiatives will be facilitated instead – something that can be done much more gracefully and discreetly.

Already some evidence of this can be seen. When the Dalai Lama was recently attending a public event in Minnesota, after seeking medical treatment in the United States, he was targeted by a plane towing a banner stating “Dalai Lama Stop Lying” – the ISC’s mantra. This suggests a change of mode, but the fact remains that these are fanatics for whom campaigning against the Dalai Lama is a matter of identity – they are changing their form of protest but not abandoning it.

Thierry Dodin is a Tibetologist. Focal points of his work are cultural history, modern history and social, political and environmental issues in Tibet and the countries and cultures of the Himalayas, as well as in countries of the Buddhist cultural sphere. Since the early 1990’s he has been most closely associated academically with the University of Bonn. He has also been associated in various functions with the Tibet Information Network (TIN), most recently as its executive director. He is the founder and director of TibetInfoNet.

More about Shugden by Thierry Dodin