Relating to the Guru 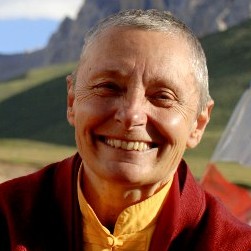 Tenzin Palmo speaks on this topic in this excerpt adapted from Into the Heart of Life.¹

Q: If one has taken a teacher and then sees them behaving badly or in seemingly inappropriate ways, what advice do you give students who are interpreting this? Is it even acceptable to leave a teacher once you have made a commitment to him?

Jetsunma Tenzin Palmo: Personally, I think that we should never completely surrender our own integrity. I think that it’s a big mistake to think that once you have taken on the teacher that’s it, and whatever he does you have to see it with pure perception. Of course, you know, one can point to Naropa and Tilopa and Marpa and Milarepa, but nonetheless I think that’s quite dangerous.

The point is that the students are the children and the teacher is the parent. A good parent helps the child to mature properly, to not endlessly be a child. And if a parent is abusive, then just because they are the parent doesn’t mean that the child should be left in their care. If a teacher really acts inappropriately or requests inappropriate behavior on the part of the student, then the student has the right, also as a human being, to say, “No, I’m very sorry, I don’t accept that,” or, “Well, okay, explain why you’re doing this.” And if the teacher will not explain, or their explanation doesn’t ring true, then I think it’s perfectly appropriate to say with all due respect, “Well, I’m sorry, I am going to find someone else.” Because quite frankly, many teachers, even though they might be very charismatic and even have some genuine experience and realization, might also have a big shadow which they’re not facing and which their culture doesn’t encourage them to face. And in dealing with that shadow, we have to use our common sense. If the relationship creates a lot of inner distress and trauma, then this is spiritually not in the least bit helpful. So without creating a lot of publicity or difficulty, one can just simply say, “Thank you very much for all your teachings,” and leave.

I don’t think the Tibetans themselves have really resolved this point. We see the teacher as the Buddha, first of all so that we don’t get attached to the personality and the appearance of the teacher. We’re not going for refuge to their personality; we’re going for refuge to their buddha nature, which they have realized and we have not, and to their ability to transmit that realization. So therefore one sees them in an idealized form. But at the same time, we have to realize that we are doing that for the sake of devotion and they are also human beings. If occasionally they act inappropriately—for example, they lose their temper over something about which there is no reason to lose your temper and they really are angry—then one can say, “Well, they are also human beings and it doesn’t matter; they have given so much through teaching and they have so many good qualities,” and leave that aside. But if they consistently are acting in questionable ways—like being very greedy, or wanting sexual relationships with their students, or accumulating a lot of money and then giving it to their family or building themselves great palaces and starving their monks, et cetera—then I think it is perfectly valid to question their conduct. Even in the ordinary world people don’t act like this.

Q: The teacher/student relationship is fundamental in Tibetan Buddhism. In reality, in the West, only a few can be so lucky to have a traditional guru/student relationship. So, often it happens to a practitioner that after some years there is less enthusiasm and interest. What can you advise to those in such a situation?

JTP: The important thing is to realize that even in a traditional guru/student relationship, it’s not really so necessary to always be around the guru. Once one has made a connection, even if one doesn’t see the guru very often and the guru is very far away, still one can keep the inner heart connection. For example, in the Tibetan tradition, there are very beautiful prayers for calling on the guru from afar. And especially if these are set to a melody and one can sing them from the heart—they create that connection with the guru, because it’s a mind-to-mind connection. Sometimes, even if the lama is sitting in front of you, you can feel there’s a thousand miles between you; likewise, you can be a thousand miles away and feel that the guru is right there, sitting in your heart. At the same time, one has to realize that the ultimate guru is one’s own buddha nature: it’s the nature of the mind, and one has to cultivate being able to be centered within one’s own innate awareness and not depend so much on an external relationship. Because when one is in the nature of the mind, then one is indeed one with the guru. This is why when we do guru yoga we absorb the guru into ourselves—to realize that his/her mind and our own mind have become one. This is very important to realize. The ultimate guru is our own innate wisdom, and if we can access and cultivate that, then the enthusiasm for the Dharma just bubbles up endlessly. It doesn’t depend on external shots of inspiration from an actual person.  ■

© Into the Heart of Life by Jetsünma Tenzin Palmo · Snow Lion Publications · Offered with kind permission from www.snowlionpub.com.

¹ This excerpt adapted from Into the Heart of Life was published in Snow Lion The Buddhist Magazine & Catalog Volume 25, Number 4, FALL 2011, page 2

More about the Teacher-Student-Relationship

  Qualities of Vajramaster, Vajrastudent & Necessity to examine each other

Minimum Qualities of a Vajramaster

Necessity to examine each other